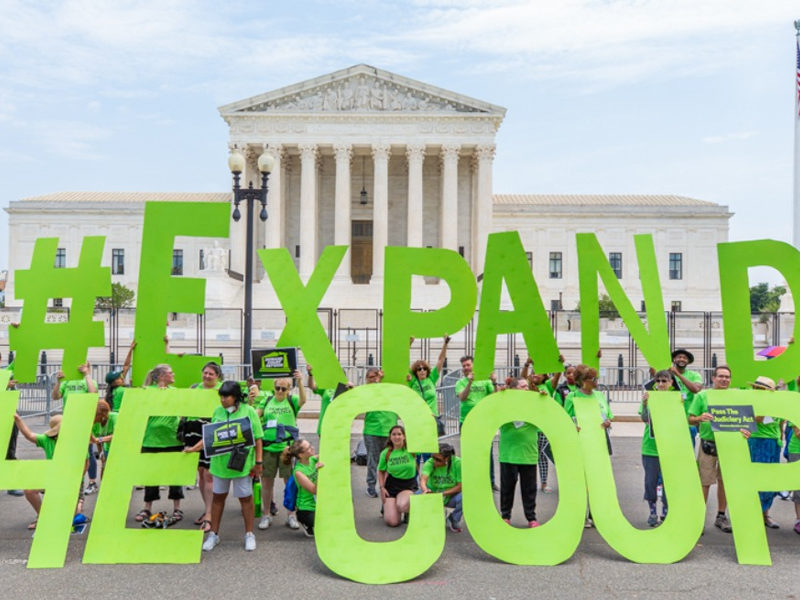 The Supreme Court has been captured by partisan, Republican interests. We need structural court reform to depoliticize the Court once and for all. You can help!
Meet with Your Congressmembers

Our courts are in crisis

With a 6-3 Republican supermajority, the Supreme Court is too biased in favor of special interests and Republican politicians. Our democracy is at risk from decisions that suppress the right to vote.

Adding four seats is the solution—and we need your help to get it done. Congress can change the number of justices on the Court at any time with a simple piece of legislation, and it has done so many times throughout American history. Now, top Democrats have introduced a bill to add seats and restore balance, and 60 members of Congress have signed on in support.

The grassroots movement to expand the Supreme Court continues to grow! Together, we’re making the case for expansion in the media, on Capitol Hill, and on the steps of the Supreme Court. Check out our video library for the latest.

Four Steps To Reform Our Courts:

To undo the damage Republicans did by stealing multiple Supreme Court seats, we should immediately add seats to the Supreme Court and appoint justices who will restore balance. Adding seats is straight-forward and easy. The number of justices is not set in the Constitution, so Congress can change it at any time. It has done so 7 times throughout American history.

Supreme Court confirmations have gotten too political. Instead of having justices serve for life and politically time their retirements, we should create term limits that ensure justices serve a uniform number of years. Term limits would give each president the opportunity to appoint the same number of Supreme Court justices each term, reducing partisan gamesmanship around each individual confirmation and making the Court more democratically representative.

While the Supreme Court is the most high-profile part of the judicial branch, the vast majority of cases in the United States are heard at the district and circuit court levels. Here too, our courts are in desperate need of reform.

Our circuit and district courts face two crises. While historically we have increased the number of judgeships to keep up with growing population and number of cases, during the 21st century, partisan gridlock has ground that process to a halt. As a result, our courts are overwhelmed with cases, leaving Americans waiting years for access to justice and courts forced to adopt shortcuts that hurt people who are not rich and powerful. Second, our courts face a crisis of diversity. Judges in America do not look like the people they serve, and Donald Trump has made the problem worse by appointing an overwhelmingly white and male group of judges.

To address both crises, a future administration should dramatically expand the number of circuit and district court judgeships and fill them with a group of lawyers who will enhance the courts’ legitimacy by improving their diversity.

The 2020 Democratic Party platform acknowledged the problem and called for the creation of more judgeships.

The movement to expand the Supreme Court is growing!

See our video library for the latest

Join the movement to #ExpandTheCourt! With your help, we can pass the Judiciary Act.

Fund the Fight to Reform the Supreme Court

We need Democratic leaders who will publicly support Supreme Court expansion. Your gift will fund efforts to elect those leaders to Congress.

*If you've saved your information with ActBlue Express, your donation will go through immediately.